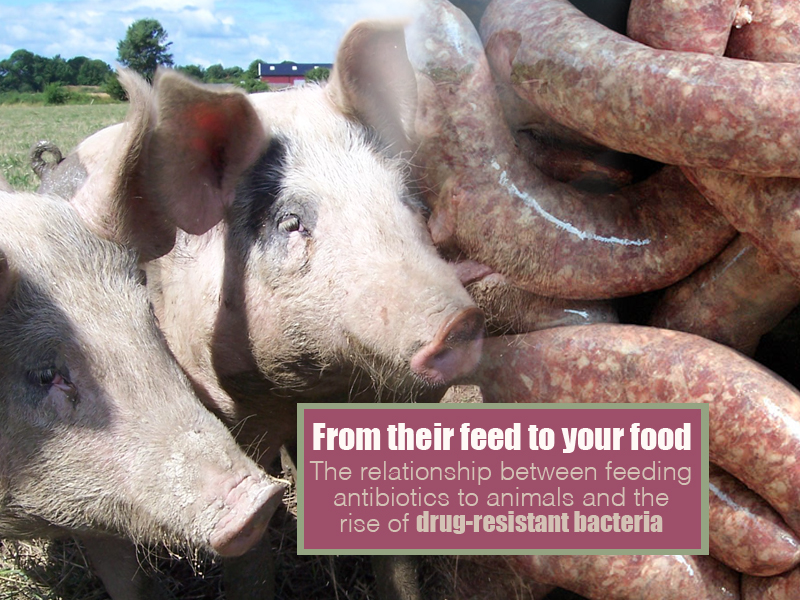 Feeding livestock antibiotics and the rise of drug-resistant bacteria: understanding the connection

A recent article in Eating Well magazine considered the relationship between antibiotic-resistant bacteria and the use of antibiotics in food production.

Infections like Staphylococcus aureus (referred to as MRSA) have more than doubled between 1999 and 2005, and the number of deaths from the infection rose from 11,200 to 17,200 during this time. Though the amount of antibiotics given to humans did not changed over this period, the amount of antibiotics fed to livestock “soared” from 18 million pounds in 1999 to 30 million pounds by 2011, accounting for 80 percent of all antibiotics used in the United States.

Livestock are fed regular, low “subtherapeutic” doses of these antibiotics not because the animals are sick, but to help them grow faster and better thrive in non-ideal living conditions. Drug companies began marketing this practice in the early 1950s, but by the 1970s, studies were beginning to question the practice, raising concerns that the animals and their handlers were growing resistant to antibiotics and that the low doses were not proven safe.

By the 2000s, studies found that substantial portions of livestock in given farm operations and, in turn, in supermarket meats, tested positive for MRSA. Antibiotic-resistant salmonella, yersinia enterocolitica, and listeria have all become more commonly found in meat samples. Though cooking this meat properly will kill the bacteria, thousands of people are sickened by them each year, and they can be fatal for vulnerable populations such as young children and the elderly.

Industry representatives deny the relationship between the use of antibiotics on livestock and resistant bacteria in humans and animals, but microbiologists are confident that the multi-drug-resistant strains are related to drug use in food animal production. Cross-cultural studies found that a ban on subtherapeutic antibiotic use in countries like Denmark (a ban that was quickly followed by the rest of the European Union) led to a dramatic decrease in instances of resistant bacteria in people and animals, yet pork production rose.

Other evidence suggests that there is a demand for drug-free animal products, reflected by companies like Whole Foods and Chipotle Mexican Grill that refuse to sell meat raised with antibiotics. Antibiotic-free meat sales figures are rising, as opposed to general meat and poultry sales numbers, which are flat.

Conscientious consumers and their purchasing power are key to changing these practices, especially since legislative changes in the United States related to the issue have been unsuccessful to date.