Solutions to back pain

Back pain, an unwelcome visitor in any body, affects different people in different ways. Whether the pain stems from the neck or from the lower back, back pain can last for as little as six weeks or for as long as six months or many years. The pain can be acute, chronic or recurring (frequently lasting for years), with acute episodes being most common and chronic pain being the most difficult to resolve. 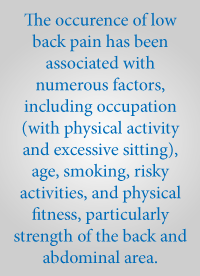 Back pain, specifically low back pain (LBP), is one of the most common health conditions in the United States and in the world. The World Health Organization detailed the high prevalence of LBP in an article from 2003. The article stated that LBP is the most prevalent musculoskeletal condition in the world. According to their research, LBP affects nearly everyone at some point in time and affects 4 to 33 percent of the world population at any given point.

One recent study analyzed survey answers from 31,000 U.S. adults who were questioned about back pain in 2002 and found that 26 percent reported feeling LBP at least one whole day over a period of three months. The study also found that back pain was more common among adults older than 45 and was slightly higher among women and among American Indians. Asian Americans had the lowest prevalence of LBP.

LBP prevalence in the U.S. population is similar to LBP prevalence among other populations worldwide. In fact, a 2003 telephone survey of 46,000 adults across 16 European countries showed that nearly 20 percent of participants suffered from chronic pain, with the most common chronic condition being back pain (24 percent) and the most common cause being arthritis/osteoarthritis (35 percent.) More than 25 percent of adults from Norway, Poland, and Italy reported pain, while only 11 percent of adults in Spain reported chronic pain. As these statistics suggest, back pain and its treatment are serious international health issues that merit further investigation.

Americans spend at least $50 billion each year treating lower back pain, the second most common neurological problem in the U.S. after headaches, according to the National Institutes of Health. A study published in 2008 compared national data from more than 3,179 adult patients who reported spine problems in 1997 to 3,187 who reported spine problems in 2005. Researchers found that inflation-adjusted annual medical costs increased from $4,695 per person to $6,096. Researchers also found that Americans spent $85.9 billion looking for relief from back and neck pain through surgery, doctor’s visits, X-rays, MRI scans, and medications in 2005, up from $52.1 billion in 1997. Unfortunately, the amount spent seeking relief did not help decrease the number of people experiencing back and neck pain.

The occurrence of LBP has been associated with numerous factors, including occupation (with physical activity and excessive sitting), age, smoking, risky activities, and physical fitness, particularly strength of the back and abdominal area. Links also have been made between back pain and psychological factors such as anxiety, depression, and emotional instability. That is, individuals who are diagnosed with certain psychological conditions and excessive emotional stress are at higher risk of experiencing back pain.

Excess weight has been shown to increase the risk of experiencing LBP. A meta-analysis of 33 studies found that being overweight or obese increased the risk of experiencing LBP, especially among women. The authors hypothesized that excess weight and/or obesity can cause systemic chronic inflammation, can increase the mechanical load on the spine, can cause spinal disc degeneration and can negatively affect disc nutrition.

Treatment for back pain, which stems from various causes, varies depending on the practitioner’s health perspectives and priorities. The mainstream medical treatments often focus on pain relief. So-called alternative treatments (such as yoga, the Alexander Technique, acupuncture, craniosacral therapy, Pilates, and chiropractic care) focus more on restoring mobility and flexibility, strengthening muscles, and relaxation. Controlled exercise and various forms of physical therapy can be very effective treatment options. In most cases, some form of exercise should be used and continued for prevention.

Up until the mid-2000s, the most commonly used and recommended treatments for back pain included pain relievers, rest, and conventional exercise, such as aerobic and muscle strengthening activities. Recently approaches to back pain treatment have changed radically. Methods that are not based on medication are becoming more readily available as more and more professional health practitioners are trained and the public becomes more educated about the many available options. One such approach is yoga, which can be more effective than medication-based treatments. Yoga exercises provide variations on stretching (lengthening), strengthening, and relaxation. The exercises also work to contract and relax muscles and organs. Yoga is very effective because is addresses both the area in pain and the rest of the body. There are many other positive side-effects to doing yoga besides alleviating pain. 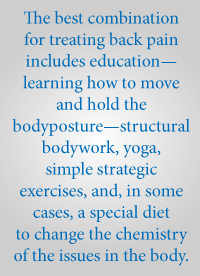 In 2005, a group of researchers at the Group Health Cooperative’s Center for Health Studies conducted a first-of-its-kind study and found that participants who attended yoga classes—compared to participants who attended conventional exercise classes or used a selfcare book on back pain—were better able to do daily activities involving the back and took fewer pain relievers after 26 weeks. Participants in the yoga class learned 17 poses from viniyoga, a style that is easy to learn. The poses from viniyoga are also useful because they can be adapted for use by various body types.

Another similar study published in 2011 compared the effectiveness of yoga stretching and to a self-care book for reducing symptoms from chronic LBP. The authors found that participants in the yoga classes experienced improved body functions and physical benefits lasting several months compared to participants in the stretching and selfcare book. With about one million people in the U.S. currently practicing some form of yoga for relief of back pain, these emerging studies support yoga’s effectiveness.

Research also suggests that acupuncture can bring moderate to complete back pain relief and can be used alone or as part of a comprehensive treatment plan. Acupuncture encourages the body to heal naturally and improves functioning through the use of needles and in some cases electrical stimulation at very precise acupuncture points. Clinical achievements, along with positive research results, prompted the National Institutes of Health (NIH) to declare acupuncture a reasonable treatment option for LBP. The actual cause of back pain is often not in the back itself, the back is only where the pain manifests. The hip and pelvis are the source of most imbalances and back pain.

Treatments for back pain can be more effective when practiced together instead of individually, or one at a time. Keyvan Golestaneh, an acupuncturist, herbalist, bodywork practitioner, and yoga teacher with 25 years of experience working with the public, recommends combining modalities and methods for optimum results and long-term prevention.

“The best combination for treating back pain includes education—learning how to move and hold the body-posture—structural bodywork (like Postural or Structural Integration i.e. Rolfing), yoga, simple strategic exercises, and, in some cases, a special diet to change the chemistry of the tissues in the body,” says Golestaneh. He emphasizes that because every body has a unique presentation of symptoms, the best combination of strategies varies from person to person.

Golestaneh explains that besides the body structure and posture, the principle cause of back pain is in tissue chemistry. The body often reacts adversely to various dietary components not compatible with the body. These substances can cause an immune response that results in inflammation and this can cause pain. This is often the case with chronic back pain. Toxins (substances not eliminated from the body) and metabolites build up in fat and muscle tissue and can cause pain. When these substances are eliminated from the body, the symptoms often disappear. Diet is one place where people can find a solution to back pain.

Golestaneh also says he has seen many cases of chronic back pain, considered manageable by only mainstream medicine with pharmaceuticals and even alternative treatments, completely cured using key structural interviews and tissue manipulation. In all cases, strengthening through specific exercises, lengthening, and structural balance will need to come into play in order to prevent future occurrences of back pain. We have provided some suggestions at the end of this article.

There are a number of educational approaches that can help prevent and resolve back pain. Besides yoga, a less well-known but effective method is the Alexander Technique, originated by Frederick Matthias Alexander during the late 1800s. The technique “is about learning how to become more aware of your body in everyday life and learning to understand the ways in which we would often tighten our bodies up, which takes us out of balance,” says Caroline Chalk, with the Society of Teachers of the Alexander Technique, in a video. Through the Alexander Technique individuals learn how daily habits affect physical coordination. The technique helps students “unlearn” habits that are harmful to the body and to the back. The unlearning takes place through increased awareness of balance, posture, and coordination while performing everyday activities. Individual sessions with Alexander Technique teachers help individuals release unwanted muscular tension throughout the body that has accumulated over years. The lessons and the practice help people learn new ways to move more freely.

This is very similar to the principles of standing Qi Gong, which is also an effective practice for LBP. Golestaneh says the simplest thing to remember when it comes to creating good posture and protecting your back is to raise your chest slightly while tucking your chin in slightly and relaxing the abdomen. In this way the rest of the body will naturally assume the best posture it can, which includes a slightly swayed lower back.

For those with more serious, chronic and nonspecific back pain, surgery is considered an option. However, this option, which severs the rhizotomy nerve or fuses vertebra in the back, should be considered an absolute last resort. In addition to nerve damage that can result from surgery, there are many delicate and vital tissues in the spine, including major blood vessels and a large network of neurological tissues that can be affected. Surgical damage to these tissues can be life-threatening or have permanent negative consequences for the patient.

Mind-body physical therapies like yoga are quickly gaining ground as effective treatment methods for back pain and are proving even more effective than medication and conventional exercise options.