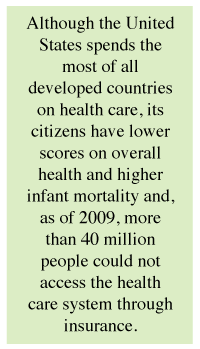 When it comes to overall wellness, instances of chronic disease, and health care access and cost, the United States is lagging behind other countries with similar economies and social development, say researchers with the Conscious Health Institute (CHI).

Over the past few years, researchers with CHI have been aggregating international health care studies from the Organization for Economic Co-operation and Development (OECD), the National Cancer Institute (NCI), the World Health Organization (WHO) and others in order to produce a research summary that compares the health status of U.S. citizens to citizens in other post-industrialized nations around the world along three key dimensions: population health, health system design, and costs of health care.

The findings, and their implications for the health status of Americans, are troubling, and also not what most people might have expected. Although the United States spends the most of all developed countries on health care, its citizens have lower scores on overall health and higher infant mortality and, as of 2009, more than 40 million people could not access the health care system through insurance. Not only are individuals at a disadvantage, but the whole systems itself is dysfunctional. Key challenges include heart disease, cancer, diabetes, and preventative health care.

Keyvan Golestaneh, M.A.,L.Ac., the director of CHI, says he doesn’t believe that most Americans are aware of their health and health care realities or how America fares in a global comparison.

“I think there is a very small population that is aware of [this reality], but I think we are under an illusion,” said Golestaneh, “and that illusion is that we have the best health care system, and that it’s the most effective health care system.” The United States excels in emergency and high-tech medicine, he says, but not in basic care prevention. The cost is also excessive.

Even though some supporters of America’s current health care system will readily acknowledge that not everyone has access to it, says Golestaneh, research confirms that the American system is not the most effective or the best in the world.

“That’s because people don’t know about the alternatives, and the way the system is structured now, alternatives are marginalized,” said Golestaneh, who personally practices a holistic, natural approach to health at his Berkley-based office and consults with people throughout the United States and internationally.

A transdisciplinary solution to troubling trends

CHI’s research findings (the full report, with statistics from the original research projects, is available online) suggest several troubling trends, trends that Golestaneh and his colleagues believe can be reversed through education and a trans-disciplinary approach to health and health care.

“A paradigm shift needs to occur in medicine and health care, one that will not only affect the economics of health care but the very way we understand how to treat illness and prevent disease and model or view the body,” said Golestaneh.

Collective conclusions from CHI’s research summary find that the United States leads post-industrial nations in the percentage of citizens with high blood pressure, heart disease, diabetes, arthritis, and osteoporosis. Americans’ life expectancy is lower than other comparable countries and its rate of infant mortality are below average for comparable countries.

“A question we should ask ourselves is, ‘How could this be if the United States has what some claim is the best health care?’” said Golestaneh. 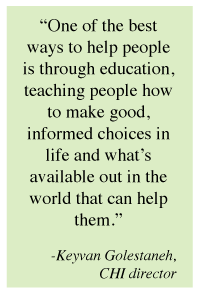 Even within the American health care system, research has found that poor and minority citizens, particularly African Americans, face even worse-than-average health realities. CHI’s researchers found that poverty and race negatively affect interactions with the health system, primarily through access to appropriate services. African-American males continue to have the lowest life expectancy in the United States. African Americans die at much higher rates in middle age, due to HIV, cardiovascular disease, and other, often treatable, conditions. Additionally, women of color have overall lower rates of regular mammograms, which experts suggest contributes to these women’s higher breast cancer mortality rates.

The conclusion CHI researchers draw from their systematic research is that lifestyle, education, and preventative medicine must be the core of the solution to these trends. Old solutions based on an outdated paradigm are showing themselves to be ineffective based on the data.

“The Conscious Health Institute is trying to make a conscious effort to look at things from a broader perspective, a holistic perspective,” says Golestaneh, referring to what he calls a systemic-ecological perspective. This perspective or paradigm allows a more accurate understanding of nature and human behavior so we can better address problem related to health and society.

“One of the best ways to help people is through education,” says Golestaneh, “teaching people how to make good, informed choices in life and what’s available out in the world that can help them.”

The Institute supports a trans-disciplinary perspective, he says, which crosses the boundaries of economics, anthropology, sociology, psychology, politics and biomedical and naturopathic practices.

Golestaneh and colleagues believe that spiritual, mental, physical, and social health must be cared for holistically, not individually.

“It’s been my experience that these can’t be fruitfully separated,” says Golestaneh.

CHI researchers conclude that two principle factors of education (or a lack thereof) and economics play a significant role in citizens’ health status. Investigating these areas could help reverse some of the disturbing trends highlighted in CHI’s recent research. Golestaneh says research and investigation alone are not sufficient unless we change what we are educating the public about.

“People don’t know about what alternatives are available to them,” said Golestaneh. “They’re automatically conditioned into a mentality that assumes there’s only one alternative out there and that’s the popular biomedical system.”

Part of this work to improve the American health care system, says Golestaneh, should include educating more people about natural health care options. When the spread of a new virus makes the news, for example, news agencies almost exclusively turn to biomedical doctors as expert authorities, he says, not practitioners of natural or what is now called alternative-complimentary medicine.

“It’s very frustrating for people like me, who practice modalities like acupuncture or Chinese medicine, to work in the U.S. health care system,” said Golestaneh. “Despite the fact that acupuncture is a very recognized medical practice and has been around longer than Western biomedicine, it still does not have the influence and the political clout that biomedicine has. People don’t know what alternatives are available.”

Golestaneh gave the example of common cold treatment as a sign of the lack of information on alternatives within the U.S. health care system and the lack of knowledge on the part of the public as to what is treatments are possible.

“Colds are quite frequent, very common,” said Golestaneh. “You walk into the pharmacy, you can find whole shelves full of 50 different cold medicines. They are advertised everywhere. Yet I know of a Chinese herbal formula that’s been around for thousands of years that actually, if taken within the first 24 hours of a cold at a high dosage, can sometimes stop the cold in its tracks and certainly shorten it by much more than anything available in the drugstore, all without any negative side-effects. But how many people know about it? Hardly anybody. But all of my patients know about it. They get very good results and would not use popular over-the-counter medications.”

Golestaneh says that if he had a millions of dollars to get commercials spots on television to educate people on the topic, he would, but he doesn’t. This highlights the important role money and advertising power plays in the United States health care system and popular culture in general.

This gets at a larger point CHI researchers are hoping to illuminate through their research: beyond educating people about other systems of medicine and preventative health, medical practitioners and citizens need to clearly see how a health care system spends its money as this is indicative of larger cultural attitudes toward health and healing and what our priorities are.

CHI researchers found that the U.S. system has the highest percentage of private spending on health care among similar countries, as well as the highest overall spending in the world. The United States spent $7,538 per person on health in 2008, yet of the countries of similar economic status, only Mexico and the United States cover less than half of the medical costs for its citizens.

Some practitioners, like Golestaneh, work on a sliding scale so that no patient is excluded, but for many U.S. citizens, even the most basic health care service costs are prohibitive. Fifteen percent of Americans still do not have health care. Poverty and race negatively affect interactions with the health system, primarily through access to appropriate services. Poor and minority citizens have lower life expectancies and higher rates of chronic illnesses such as diabetes and breast cancer.

Despite the United States’ massive spending on health care, CHI researchers conclude that the country has not achieved consequential improvements in quantity or quality of life; it falls well below comparable countries in its spending-to-health ratio. Quantity of life can refer to length of life, which the U.S. has extended, just not as much as some other countries.

Golestaneh, who admits to being idealist (as well as a realist), does believe that the complex factors affecting American citizens’ health, such as those outlined in CHI’s recent research findings, can be better understood with a trans-disciplinary approach, an approach that can illuminate the interplay of a variety of health factors. This moves beyond just “understanding,” but finding solutions, which emerge from a transdisciplinary approach.

“It’s possible to see these very connections,” said Golestaneh. “This is not new. The question is, will the knowledge spread enough so that people will take it into account and allow it to affect the choices people make?”

CHI’s research findings conclude that systematic change to a country’s health care system requires both individual and societal-level changes as part of a paradigm shift. Americans face serious challenges to their overall quality of life. Researchers found that nearly 70% of U.S. citizens report a body mass index higher than doctors recommend for good health, a condition associated with activity-limiting chronic diseases, including arthritis, diabetes, heart disease, high blood pressure, and osteoporosis. Individual-level change can come through maintaining a healthy weight, engaging in regular exercise, and eating a diet low in fats and sugars.

With regard to national changes to the health care system, Golestaneh looks to countries such as China and Germany as having interesting health care models. China’s system, for instance, is marked by strong collaboration between traditional system (TCM) and biomedical doctors. Germany’s model makes access for all citizens a priority and funding is not a problem. A “best practices” approach would be good to adopt so we can find out what works best.

Golestaneh says he believes in grassroots efforts, but believes large-scale interventions are needed as well if the United States system is to fundamentally change.

“Ultimately… to cut into some of these entrenched networks, these complicated networks of interlinking government institutes, and economic powers like pharmaceutical companies with powerful political influences, you’re going to have to get political power,” said Golestaneh. “But again, people at the grass roots can influence people’s political power. And they already are.”

Although the solutions purposed are a step in the right direction (increasing access for example), the changes are still completely rooted in a biomedical paradigm and the does not change any of the networks that support the current dysfunction in the system.